This morning, my five children and I sat around our island and shucked sweet corn.

My oldest, Ethan (who will be 16 on Sunday), expressed a new appreciation for pesticides.

It was, however, somewhat understandable.

The corn we were shucking was from the CSA, from Crooked Sky Farms.  Organic, fresh, but quite wormy.

Wednesday is CSA Day, where (currently) 24 people come to my home and pick up their share of local, organic, single-farmer-grown produce.  However, on Wednesday, I thought that I was going to have a baby, and I called in the troops — a fellow CSA member who had volunteered to host the pick-up, should I be giving birth or something like that, especially since we’re planning a homebirth.

In retrospect, I feel like a chump for calling her, because here it is, two days later, and I still don’t have a baby.

The instructions from the farm said to give everyone three ears of corn.  She was about halfway through the afternoon when she realized, “We are going to have a LOT of corn left.  A LOT.”  She upped the remaining people’s share to four ears, but was also worried, like perhaps the farm unintentionally gave too much corn, and they were going to ask for it back.

So, she came to my home yesterday with all the leftovers, including four boxes of corn — each box holding 25-40 ears of corn.  Clearly, each member could have had SIX ears, and we still wouldn’t have run out.  I’m not sure what happened — if they delivered too much accidentally, or if they just gave extra so that folks could pick through the ears and get the best ones, or what.

In any case, she kept two boxes, as did I.  I assured her that she had done nothing wrong;  sometimes, you just have to go with the flow and adjust, and she just didn’t know that, as this was her first time.  And, one of the perks of being the host is that you get to decide what to do with the leftovers, and one of the decisions you are free to make is, “Why, I’ll just keep it!”

The substitute host has seven kids;  I have five (almost six).  We happily kept our corn.

HOWEVER…  I must say, this corn was definitely picked-through, and not nearly as pretty as what you’d see in the grocery store.  Most of the ears were, as I mentioned, wormy.  (However, cut off the top third or half, and voila!  You have a beautiful half-ear of corn.)  Some of it was way too mature — dented kernels throughout, telling me that it was over-ripe, and that the sugars had turned to starch, and that it wouldn’t be good eating.  Some of the ears were just too worm-eaten or even moldy, and the whole ear had to be chucked into the compost bin.

So…  It wasn’t exactly pretty work, shucking this corn.  There was a lot of, “Eeeewww…” and ears dropped like a hot potato when pulling back the husk revealed three caterpillars, happily munching away at the kernels.

Wesley (age 11) eventually got grossed out and became mostly the guy who carted all the shucks, silk, and “dead” ears off to the compost bin.

Audrey (age 7) became distraught that I wouldn’t allow her to make a habitat which would enable her to keep all the caterpillars.  Indeed, I was insisting that everyone simply throw away the caterpillars in with the shucks.  She was horrified by my casual discarding of life.

However, Ethan, Grant, and 4-year-old Fiala hung in there like champs to the very end.

I wish I had a “before” picture to show you just how ugly this corn was…  But, I didn’t take a pic.

I found myself, though, reflecting on the treasure we uncovered, in pale yellow and white kernels — one that required a little work.  One that required us to “extract the precious from the worthless.”

19 Therefore, thus says the Lord,
“If you return, then I will restore you—
Before Me you will stand;
And if you extract the precious from the worthless,
You will become [a]My spokesman.

We have enough “pretty” whole or mostly-whole ears of corn to give us two — maybe even three — nights of sweet corn feasting with our dinners.  And that is for our aforementioned large family of seven.

I also took the not-so-pretty ears — those which were less-than-half-sized, those which needed multiple kernels trimmed out, or even whole sides cut off, due to being dried or worm-eaten, etc. — and cut the remaining good kernels.  Those efforts resulted in a couple of knife nicks on my left hand, a partially numb right index finger from grasping the knife for six passes per ear… AND, five quarts of kernels to add to our freezer. 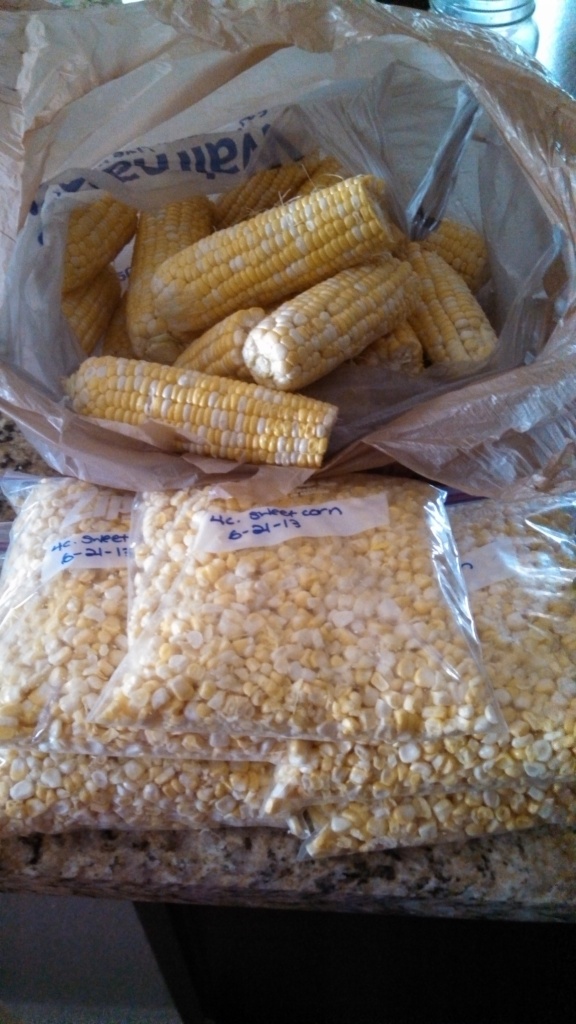 It’s hard to tell from this pic, but there are probably 25-30 ears of corn in the plastic shopping bag — most of them only partial ears…. But it’s a lot of corn!

This song was running through my head this afternoon, as I extracted the precious sweet corn kernels from what previously appeared to be two boxes of worthless, picked-over, dried, wormy, partly moldy corn…

I don’t know how to explain it…  It just feels redemptive and rewarding to have rescued all that corn… to have worked for it, toughed it out when the going was gross, and now my freezer is stocked and we will feast on hot, buttered, salty corn-on-the-cob tonight.

I have created a monster:  Buddy, the Tomato-Loving Puppy.

It started like this:  On Wednesday, as part of the Crooked Sky Farms CSA, I ordered two extra boxes of organic, heirloom tomatoes, 30 pounds total (for $30!!)*.  On Friday, I processed half of them to make salsa, the first step being peeling and coring them.  After scalding the tomatoes and peeling them over the sink, I pulled my cushy office chair up to the island — that’s how I’ve been doing my meal prep:  sitting — and started cutting out the tough area where the stem attaches with a paring knife.

Our “old” dog, Tally, sat down next to me, very attentive, with a polite request in her eyes.  I kept declining, “Tally.  Really.  You don’t want a tomato core.  Dogs don’t like tomatoes.”  But, she patiently and gently disagreed.  Finally, I tossed her a core.  She snapped it out of the air and wanted another.  I tossed her another.  And another.  She ate them like candy!  In short order, Buddy, who is 5 months old, figured out that Tally was getting something he wasn’t and came to investigate.  Buddy is quite pushy and bossy — which bothers me — but I ended up using it as a training reinforcement for him to sit and stay.  Soon, he was on one side of me, Tally on the other, and as soon as I cored a tomato, I would toss it to alternating dogs.

Eventually, I ran out.  Tally was all right with that, and sauntered off to lounge in the living room.

Buddy was NOT all right with me running out.

He’s not a very vocal dog.  He whines a bit, but rarely barks, and is just generally a quiet dog.  But, after he figured out that nudging my leg with his nose was not producing any more tomato cores, he put up a fuss.  I wish I would have recorded it.  He vocalized with such incessant pleading, loudly begging for more tomato cores, deep in his throat with a variety of pitches, howls, and vocalizations.  He was also trying his best to sit and stay, maximizing the possibility of obtaining more tomato scraps.  But, he worked himself just about frantic in his quest for more tomatoes.  At first I was highly amused.  NEVER have I heard him talk like that!  But after a good ten minutes, I started to feel very sorry for him.  Not sorry enough to chop up a good tomato and give it to him, but I did commiserate with him and try to comfort his comfortless self. 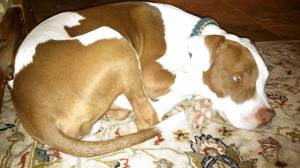 Buddy, in a quieter moment

The next day, Saturday, I processed nearly 15 more pounds of tomatoes for Tomato Confit Sauce, and the same scene was repeated, much to the dogs’ delight.

However, Sunday… Buddy decided to take matters into his own paws.

I have six tomato plants growing in my mini-garden.  Three of them are very large.  They haven’t been the most fruitful of tomato plants, probably because I haven’t as highly-prioritized my garden this spring/summer as I have in years past!  I’ve fed the plants infrequently, have not hand-pollinated, and other than putting tomato cages around them, mulching them with homemade compost, and watering them faithfully, I haven’t really done much with the plants or to them.  However, each plant has a number of tomatoes in varying stages of ripeness, with the very first tomatoes of they year JUST ready to pick.

And they were picked.  By Buddy.

My husband Martin woke me up on Sunday morning, “Babe… I’m sorry to tell you, but Buddy ate all your tomatoes.”

“All the ripe ones.  They’re gone.  I was on the back patio and I could see him over by the garden, but I couldn’t really tell what he was doing until it was too late.”

I practically ran — with my 38 week pregnant belly — down the stairs and out the door to inspect the damage.  Sure enough.  Only bright green tomatoes remained.

And this is AFTER this past week where I have mourned him plucking four of the six muskmelons off the vine.  That, while I was heartbroken, I sort of understood:  They looked like oversized tennis balls.  I could imagine his confusion.

But all my tomatoes???  Oh, that saddened me.

And then, he one-upped himself:  He branched, later Sunday evening, into sampling the GREEN tomatoes.  He ate at least 2-3, and I found three more, on the plants, with teeth punctures in them.

The only good news about this is that, a short time later, he puked up the green tomatoes.  I’m hoping that the experience is enough for him to stop nabbing my tomatoes.  And in the meantime, my husband is going to rifle around in our shed and see what he can find for some temporary fencing.

*They have a Groupon going!!  $24 for 15 lbs of Crooked Sky organic, heirloom tomatoes.

Things around my home (NOT baby-related — mostly) this last week.